Phil Ashcroft
Craft worker, counsellor, would be poet, who has also worked in therapeutic horticulture and mental health. 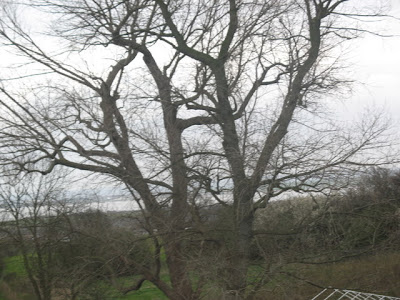 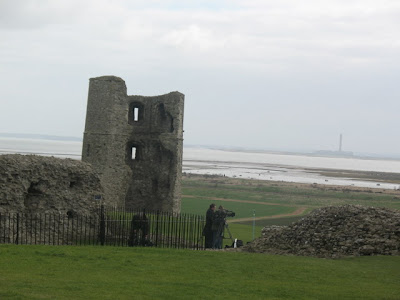 Hadleigh Castle, Chris Fenwick with the Thames Delta in the background. 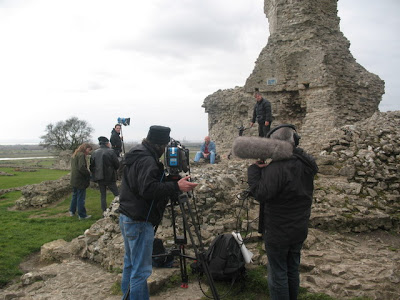 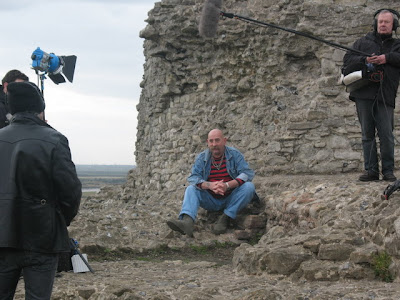 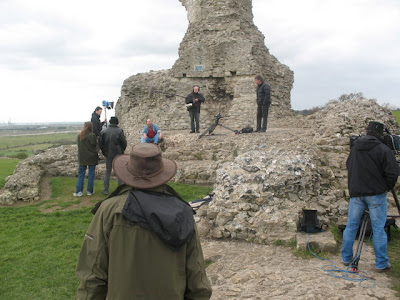 Myself watching ...apologies for anorak with asymmetric hood.
A cold day in march 2008. The first time I'd met up with Rico for decades. ﻿Just experienced that shock you get when someone you knew well in your teens appears and you find them totally changed. Then you blink and they are exactly the same person. No doubt it was the same for Rico. Who was this grey haired guy with funny ideas that got into trouble with him at Sweyne School!? Bleedin' 'ell it's 'arry! You all right mate? Odd memories sneak back. I recall Rico and I sniggering as we watched Lee write PHALLUS [a portent of things to come, eh?] in large letters on the back of the school notice board just before we all got caught and hauled up in front of  Mister Bowman, the Headmaster,  for interrogation and punishment.
Hadleigh Castle is a potent psychogeographical location for me. I used to go there on a summer's evening after it had been locked up, climb over the railings and ascend the tower, the one behind the sound guy in the above photos, and sit there and look down at Canvey and all the oil installations along the estuary. You could smell the burning oil from the cat crackers when the wind blew from the south west and as the sun set the 'towers burning' would become brighter and more ominous and more like the last panel - Hell- of the Bosche Triptych. I think we made this comparison even then.  Fancying myself as a yogi, I sometimes sat in the lotus position and chanted Om Mani Padme Hum. We did things like that in those days. It was the late Sixties after all. Looking back I can still sense the strange romantic optimism of the time. I still feed on that feeling. It helps dispel the sense of gloom that the current world gives me.
I was pleased that Julien and George tuned into the atmosphere of the place and the period. Almost uncanny it was.
Posted by Phil Ashcroft at 22:51

For years now we’ve helped so many organizations and companies in hacking services.
TECHNECHHACKS is a team of certified hackers that has their own specialty and they are five star rated hackers.

We give out jobs to hackers (gurus only) to those willing to work, with or without a degree, to speed up the availability of time given to jobs!!

Thus an online binary decoding exam will be set for those who needs employment under the teams establishment.


we deal with the total functioning of sites like,

Thus bewere of scammers because most persons are been scammed and they ended up getting all solutions to their cyber bullies and attacks by US.

I am Jason williams one of the leading hack agent.

PURPOSE IS TO GET YOUR JOBS DONE AT EXACTLY NEEDED TIME REQUESTED!!!

I’m always available for you when you need help.